My experience studying english in Malta 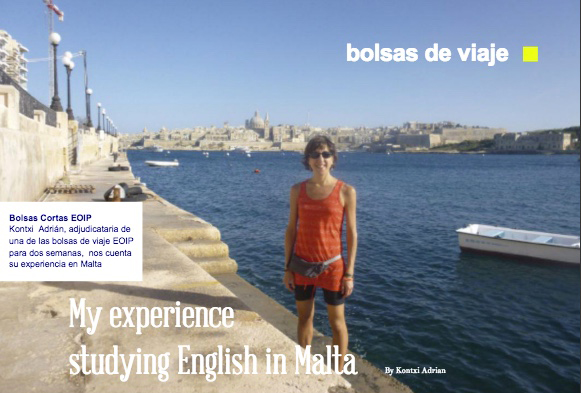 I was a lucky one who received a “bolsa de viaje” os the Official Language School and therefore I sepnt two weeks in Malta studying English and also knowing the country.

I decided to go to Malta, not only fr the good weather but also because there are lot of English schools where you can study different kinds of lessons.

In my case, I took two different classes, one was a conversation class and the other personalized general English. Ther were very interesting for me because I wanted to improve my spoken Enlish and besides, they told me that I had a very strong Spanish accent and I wanted to change it.

In addition to this, I did a scuba diving course, but only one day. At the beginning, I was overwhelmed due to all instructions you need and because of the heavy equipment you need to do the activity. Although it´s true that under the water it is not so  heavy, you have to control your balance. It was a bit strange at first but then, I had a good time and I saw a lot of different fish. It was a wonderful experience that I recommend doing.

The Maltese language is the national language of Malta but English is also an official language of the country. Because of that, you don´t hace problems to practice you English when you are sightseeing. Besides, Malta is popular tourist destination and there are a lot of foreing people working there too. So, It´s packet with tourists and the main advantage is that you can meet a lot of different countries and you can learn a lot from them. Having said that, you can find a lot of Spanish people working there too and if you want to practice you English I suggest avoiding them and trying to speak with local people.

As I said before, Malta is a tourist destination, and because of that, it ins´t cheap as I thought, as they hace different prices for the summer and fot the rest of the year. Besides, given that it´s a small island, they have to import the most of the food which makes the price of the food higher than in other countries. On the contrary, you can move very easily in the island with the public buses. So, I took advantage of this, and I visited several cities. For instance, I recommend going to Valeta which is the capital and also very warm.

To sum up, it was a wonderful exprience and I think everybody shloud do something like that if they really want to improve their English. Because, you can kill two birds with one stone, you hace the opportunity to make your English better while you get to know another country.